Dr Knuth said: “I think UFO Sightings has become something of a religion with an agenda, discounting the possibility of extraterrestrials without scientific evidence, while often providing silly hypotheses describing only one or two aspects of a UFO Sighting encounter reinforcing the popular belief that there is a conspiracy. “A scientist must consider all of the possible hypotheses that explain all of the data, and since little is known, the extraterrestrial hypothesis cannot yet be ruled out."
UFO Sightings NASA Urges Take UFO Alien Claims Seriously 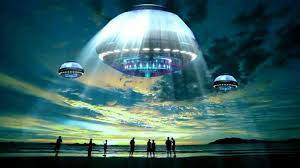 On Monday, March 11, 2019 at 12:20 am Eastern Time in Wareham, Massachusetts, between my home and the Mass Maritime Academy above Onset Bay at around 20 thousand to 30 thousand feet a large round white glowing UFO just hovering in one spot. Which was to the East of my location. It did not appear to be a planet or a stare. I also observed what appeared to me to be three military jets possible from West Hover Air National Guard base “possible F15's” flying around this UFO. Looking out from the slider of my back deck from my kitchen. The UFO Sighting was glowing white when I observed the three military jets flying around it. When the jets approached it seemed to change color and glowed red for a split second then disappeared for what seemed to me a couple of seconds. UFO reappearing close to the same spot as it disappeared zig zag from north to south followed by a rapid acceleration to the West and then totally disappearing from site. A quick note the location where I made my observation from is near PAVE PAWS US air force NORAD radar site also Otis Air Force base were the USAF has a drone test flight facility also Joint Base Cape Cod where the Massachusetts Army National Guard along with the regular US military conduct anti-terrorism training. Finally a little about my background I have worked as a landscaper, and I am currently an amateur radio operator and have been involved with Regional Civil Emergency Services (RACES), and Amateur Radio Emergency Services (ARES). Which required me to undergo extensive emergency communications, and search and rescue training.
at March 16, 2019 No comments: Links to this post